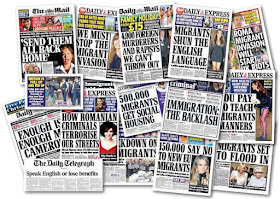 Raphael Hogarth of The Times tweets "It's amazing how immigration has completely receded from the Brexit debate, having been such a massive feature of the referendum campaign". Quite an astute observation.

One might suggest the reason for this is that the media finally has something to do. Just about every hack and wonk in the land is fixated by Brexit, following every twist and turn, diving into the details a each promoting their own take.

The media has only a certain amount of bandwidth and is usually only capable of handing one or two issues concurrently. If every there is a major terrorist incident, it will fill every page with every angle for days on end because it's easy and cheap copy. These things happen often enough that they have their own institutional routines and they know the drill. They know exactly what to do.

The rest of the time, when the news agenda isn't full they go flying kites to see what news they can provoke. The Daily Mail is especially good at this in that it will suggest that sausage rolls have been banned by a council to avoid offending Muslims, when in fact it will be a moronic decision by a head teacher and will have zero official standing. The article will say that much but that won't get in the way of a titillating headline.

Similarly it will take great pleasure in running a story on the number of schoolchildren who do not speak English as their first language. The statistic they use for the basis of an article will be a sample of London schools where unsurprisingly the majority will be of foreign origin. Here is the Telegraph doing exactly that. I didn't have to hunt to find that article and if I delve a little deeper I will find many more of its type.

So what triggers these articles? Is it actually news? No. It's just that on a slow day with nothing much to report, if there happens to be a report published by a think tank or NGO then it will have the media's full attention simply because it has nothing better to do. On any other day such a report would be completely ignored. It really all depends on how juicy the executive summary is. No hack is going to actually read it.

It is hardly surprising that in recent years the issue of immigration has been centre stage. Being it a thorny issue the main parties wouldn't touch it with a barge pole, but you could always count on Ukip to provide a headline or a pull-quote. That then gives room for policy hacks like Matthew Goodwin to promote their "left behind" narratives - and it gives the handbag-clutching left a "rise of the far right" meme to chew on.

The subject then becomes a cottage industry sustaining the politco-media bubble. Dispatches or Panorama will send a "research" team to Bradford or Burnley to find an ignorant northerner to moan about foreigners, while camera crews take poignant cut scenes of a long abandoned mill looming in the mist. It sustains the careers of journalism graduates hoping to make a name for themselves in television.

Ultimately it is the media who are primarily obsessed with immigration. It is their bread and butter. Newspapers are in the business of selling fear. In the same way that horror films are a timeless genre, newspapers like nothing more than to sow fear and prod the politicians into saying things outside of their comfort zone.

We saw in 2015 the feverish reporting of the "summer of death" in the Mediterranean. For weeks the media reported it as though it were something new when in fact it had been going on for some time and is still happening now. Since 2015 was an election year and Ukip was the media's favourite plaything, it's all we saw day in, day out. Fast forward to now and a hundred people could have died in the Mediterranean just today and it wouldn't rate as news. It might appear in a Reuters ticker somewhere but that's it.

As much as it isn't an election year, the media gets bored just the same as the public do. Even an Islamist terror attack has to be either in Paris, Berlin or on home soil for it to rate. Having used up all the platitudes and rinsed every narrative, unless there's human interest story, it slides to the bottom of the news agenda in twenty-four hours.

There is also another good reason why immigration doesn't rate right now. The media has had its pound of flesh. The story arc is over for now. There is no domestic political angle like Ukip.

Ukip is central to it as the party was largely the media's own creation. There is a Rite of Spring aspect where the sacrificial virgin dances herself to death. For the media, they've had a two-for-one out of Ukip. Ukip brought some intrigue to what would otherwise have been a distinctly tedious election between two virtually identical parties. Then they had a referendum to play with.

Arguably you might even say that immigration doesn't rate because Ukip doesn't rate. There is no story there except for those of us who like a bit of schadenfreude. The media caravan has moved on. We are back to what they love the most; Tory splits - and now a dysfunctional fag end government making a royal pig's ear of Brexit.

In fact, even Brexit doesn't seem to rate over splits in the Tory party. There is a very real danger of talks collapsing and  all the horrors that entails and yet Grant Shapps is somehow more interesting to them. Even the Labour party doesn't feature as a story.

Ultimately media follows power and power is centred in Westminster, so every single issue is viewed through the Westminster prism as to how it may or may not affect the next election. Since there is no election on the cards the only political event on their horizon is the possibility of a Tory leadership contest - and they will do everything in their power to make that happen. If immigration was a stick to beat them with then it would be in the news. But this time it isn't - so it isn't.

There is a feedback loop between the public and the media. The media talks about immigration and sets the talking point agenda and if sustained for long enough it drifts into the Overton window. But then it is just as readily forgotten by the public as they are given something else to churn over. They are every bit as fickle as the media.

At some point we can expect immigration to return as an issue but only as an adjunct. At some point a decision will have to be made on our future trade relationship with the EU and that will require an unpopular decision. The media will then resurrect immigration as a stick to beat the government with, ever keen to push a "betrayal" narrative. It's all good sport for the media.

That, though, is possibly why we will crash out of the EU without a deal. At some point a decision has to be made about the final sum we pay to the EU. The Telegraph and the Express will play their games and even a reasonable sum will be viewed as "caving in to Brussels". Political opportunists will use it to their advantage. This is why we have not, as yet, seen any progress in negotiations. Mrs May is kicking the can down the road.

Ultimately a no deal Brexit has become the most likely Brexit because it is the path of least resistance. As a path it does not not require any courage, no decisions have to be made and blame can always be deflected. With the help of the media, they might even get away with it. It really all depends on how keen media barons are on not having Corbyn in office. You would think, with what is at stake, that there would be some sense of urgency in sounding the alarm - but clearly cabinet splits are more newsworthy than whether we survive as a first world trading nation.

We should not be in the slightest bit surprised that immigration has dropped off the agenda. All too often the media's fixations and obsessions are a galaxy apart from the concerns of the public. The immigration debate has been an indulgence for a media that has not had anything of substance to cope with for more than a decade. The devil finds work for idle hands. I rather expect things would look very different indeed if we had a media that was interested in reporting news rather than manufacturing it.
Pete North at 07:47
Share